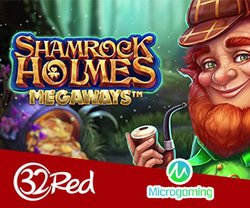 Sherlock Holmes is one of the most renowned private detectives in the world, known for his proficiency in logical reasoning, forensic science, deduction, and observation. He first appeared in "A Study of Scarlet" back in 1887 and was eventually featured in 56 short stories as well as 4 novels by 1927. By the 1990s, Sherlock Holmes was in more than 25,000 stage adaptations, television productions, films, and publications. Therefore, it should come as no surprise that Microgaming based their newest slot around this detective. However, for the first time players will get to enjoy Sherlock Holmes infused with a lucky leprechaun while playing the new game called Shamrock Holmes MegaWays.

The new Shamrock Holmes MegaWays slot from Microgaming, in partnership with All41 Studios, is propelled by an uncommon reel structure that plays host to 6 reels with 7 rows and comes equipped with a jaw-dropping 117,649 Ways to Win. You will also be able to take advantage of several popular bonus features in the game, including a rainbow wild symbol, a shamrock scatter symbol, a free spin feature, a magic forest re-spin feature, rolling reels feature, and win multipliers along with a top payout of up to 28,000 times your total bet. You'll also have the freedom to enjoy the new slot without having to download any software thanks to the 32Red Casino instant-play platform that you can access on both your desktop and mobile device.

The new Shamrock Holmes MegaWays slot impresses with a nearly endless variety of bonus features that are bound to boost the entertainment value during your gaming session. The first special symbol that will play a huge role in both the base game and free spin feature is the wild symbol that is portrayed by the golden 'W' in front of a rainbow. The rainbow wild symbol will substitute for all other symbols in the game but will not play substitute for the scatter symbol or the symbols that participate in the activation of the re-spin feature. It's also worth mentioning that the rainbow wild symbol will only appear on the extra reel located above the main reel structure.

The second special symbol in the game is the golden shamrock coin that will represent the scatter symbol on the reels. You will need to display at least 4 shamrock coins to successfully unlock the free spin feature. You'll receive a total of 10 free spins when the feature is unlocked and every time a shamrock coin is displayed during the free spin feature, you'll receive 2 additional free spins. In addition, you'll also benefit from a 2x multiplier on every spin and you'll get to increase the multiplier value by 1x when you activate the rolling reels feature in the free spins round. What's even more impressive is that the win multiplier is unlimited, so you can increase it as many times as you like to further boost your chances of winning big.

The final bonus feature in the game is the Magic Forest Re-Spin feature which you can activate in one of three ways. All three variants will require three shamrock coins to land on the main reels along with a leprechaun, or a pixie, or both a leprechaun and a pixie. This feature can only be activated in the base game and when you do, you will receive a free re-spin that will come with a guaranteed Megaways reward.

Your reel-spinning adventure at 32Red Casino will take place in a dense forest, in the heart of the Emerald Isle. Upon your arrival, you'll be greeted by an array of captivating slot symbols that will help you boost your bankroll throughout your gaming session. The most valued symbol in the game is Shamrock Holmes himself, giving you a top payout of up to 100 times your stake when 6 are displayed on a winning payline.

Before you can start your adventure alongside Shamrock Holmes, you will first need to evaluate the betting options available in the game. The new Irish-based slot from Microgaming offers a total of 17 coin denominations to ensure both high roller and a beginner can enjoy the slot without breaking the bank. The smallest bet size to set the reels in motion is only $0.20 a spin, while the highest bet size available in the game is $20.00 a spin.

You will also discover loads of additional features to make you stay more convenient, including the ability to disable/enable the sound effects, a quick spin mode to shorten the time for each spin, and an autoplay feature that will give you the freedom to choose up to 100 automated spins without having to touch your mouse, keyboard, or screen.

The new Shamrock Holmes slot from Microgaming is a highly volatile game with an attractive return to player ratio of 96.44%. If you wish to increase your chances of winning even further, we highly recommend that you claim a sizzling 32Red Casino bonus before making your way to the Emerald Isles in this new slot from Microgaming and All41 Studios.

Here you are going to be able to learn about the Arctic Enchantress slot in our review of it for users on the 32 Red Casino. Find out what it has to offer here!
Read More

Link up with Microgaming at 32Red Casino to pursue the Leprechaun in Leprechaun Links. Use special Link&Win and Powers Stacks features to find his pot o' gold!
Read More

Battle against Greek Gods while playing Microgaming's new slot at 32Red Casino and take advantage of an X Up feature, Free Spins, an Upsizer feature, and more.
Read More

Meet the God of music and archery while playing Microgaming's new slot at 32Red Casino and benefit from an amazing link feature, free spins, wilds, and more.
Read More