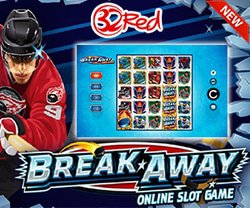 Even if you don't consider yourself to be the biggest ice hockey fan in the world, you still need to play this extraordinary online slot from Microgaming due to its incredible payout potential and the arsenal of bonus features that you can unlock during your gaming session. The new slot is called Break Away Deluxe which is a sequel, and it features photorealistic graphics along with smooth animation quality and stunning sound effects to provide a truly exceptional experience on the reels.

The new Break Away Deluxe slot from Microgaming plays out over a 5x3 reel structure along with 243 explosive Ways to Win. You will also appreciate the fact that the slot offers a plethora of remarkable bonus features with loads of winning opportunities, including a free spin feature, stacked wild symbols, a smashing wild feature, multipliers, a rolling reels feature, and scatters along with a 500-coin jackpot prize up for grabs in the base game. The new slot also comes with added convenience as you can enjoy the game on the instant-play platform from 32Red Casino which means there's no additional download required from your end.

The new Break Away Deluxe slot at 32Red from Microgaming utilizes the tried and tested Rolling Reels feature to assist you in forming even more winning opportunities on the reel set. Once you've formed a winning combination, the winning icons that formed the win will disappear, making room for brand-new symbols to fall into place which can give you another chance at winning big.

This Microgaming slot also comes equipped with a unique Smashing Wild feature that is randomly triggered after any initiated spin. Ice Hockey players will start to appear at random during the base game and have the potential to transform the second, third, or fourth reels into wild reels, guaranteeing a winning combination in the process. These wild reels will remain in place for any successive rolls as well.

Lastly, the game also impresses with a free spin feature which you can activate when you display at least 3 scatter symbols that are portrayed by the flaming puck icon. Once the free spins round is activated, you will receive 15, 20, or 25 free spins if you land 3, 4, or 5 flaming puck scatter symbols, respectively. The free spins will also come with a multiplier trail feature that comes into play after each consecutive win. The multiplier value can go as high as 8x when you successfully have 5 consecutive wins.

You will also be greeted by a vast selection of betting options in the new Break Away Deluxe slot even if you are unable to alter the 243 Ways to Win system. The slot comes with 27 different betting options that start at a minimum of $0.50 and increases up to a maximum of $50.00. This gives you a wide range to choose from to ensure you find a preferable betting option that suits your playing style.

Play the new Break Away Deluxe Slot at 32Red Casino

Microgaming new Break Away Deluxe slot offers a 96.42% return to player ratio and is considered a low to medium variance slot. We recommend that you claim a lucrative 32Red Casino bonus before heading to the ice rink as this will give you tons of additional winning possibilities once you set the reels in motion.

Here you are going to be able to learn about the Arctic Enchantress slot in our review of it for users on the 32 Red Casino. Find out what it has to offer here!
Read More

Link up with Microgaming at 32Red Casino to pursue the Leprechaun in Leprechaun Links. Use special Link&Win and Powers Stacks features to find his pot o' gold!
Read More

Battle against Greek Gods while playing Microgaming's new slot at 32Red Casino and take advantage of an X Up feature, Free Spins, an Upsizer feature, and more.
Read More

Meet the God of music and archery while playing Microgaming's new slot at 32Red Casino and benefit from an amazing link feature, free spins, wilds, and more.
Read More